Alas I have run out of pictures to share from the Netherlands so this will be my last post until I venture abroad again; hopefully in the near future.  I will be continuing to post on my other blog http://geowoodward.wordpress.com/ which has photos from my adventures in California.  I’ll leave you with a few of my favorites from the Netherlands.

One of my favorite ventures was to the ‘Heineken Experience’, not just because 3 beers were included with the admission price, and there was a horse that shared my name, but because it was  a great place to people watch and I got to personalize an actual bottle of Heineken. The end of the factory tour is set up like a club, disco lights, loud music and table games so people are behaving as if they’re in a club.  One guy in particular caught my attention because he was having his wife circulate around the room collecting all the unfinished beers and pouring them into his glass.  Yep, he was getting hammered.  I happened to be leaving the factory at the same time they were and they were trying to collect their free gift, which could only be collected by visiting the factory store in a different part of town.  Heineken provides a boat from the factory to the store but the last boat of the day had just left; Mr. Hammered had difficulty understanding this, I felt bad for the employee that had to try and help him understand.

I didn’t understand the cow at first but was reminded they feed the hops to the cows after making the beer.

Since I teach Geography I felt this was more than appropriate.

Today was one long day beginning with a four hour bus tour of Barcelona, winding down with a bike tour of the city, and ending with a bland Spanish dinner. The tour wasn’t so bad we were able to get out a couple of times and explore stuff, the coolest of which were the Gaudi stops. The first was Park Guell. Though we went early in the day it was tough to get pictures sans people; still absolutely stunning. 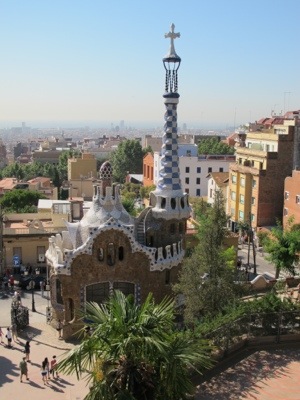 Next was Sagrada Familia where I saw this guy:

Which reminds me, at Park Guell I saw this in a tree: 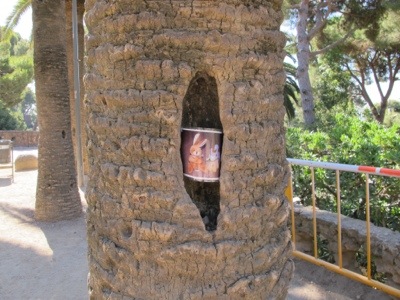 The bike tour off the city had a rocky start because we were waiting in front of the shop that was running the tour but no one as there. Across the plaza we noticed there was some dude sitting on a bike with the shops logo on it chatting with some folk. One of us said, “Hey, let’s go ask that guy what’s up.”

He was the right guy to ask but we had been waiting in the wrong place. Th meeting place was in a different plaza a block away, and the bikes were down a side street another block away. Meh, that’s Spain. Once we got started and navigated Barcelona traffic, no small task especially with 25 cyclists of varying skill, the ride was awesome. We were already tired and hot form the day but the ride changed everything. Without it I wouldn’t have seen this