One of the last things we did before leaving London was take a side trip to Oxford the low light of which was that the bus took longer than scheduled both ways and the second bus broke down. Still, had a good time.

Full disclosure, I usually tune out tour guides even when they’re my colleagues, sorry, but I’d much rather wander and see stuff.  Why is that relevant? Well, because I don’t exactly know what most of these photos are of, though I do know they were all taken in Oxford, England. So here are some things I saw worthy of being photographed:

Same, but diorama filter on camera

Thought it was pretty. 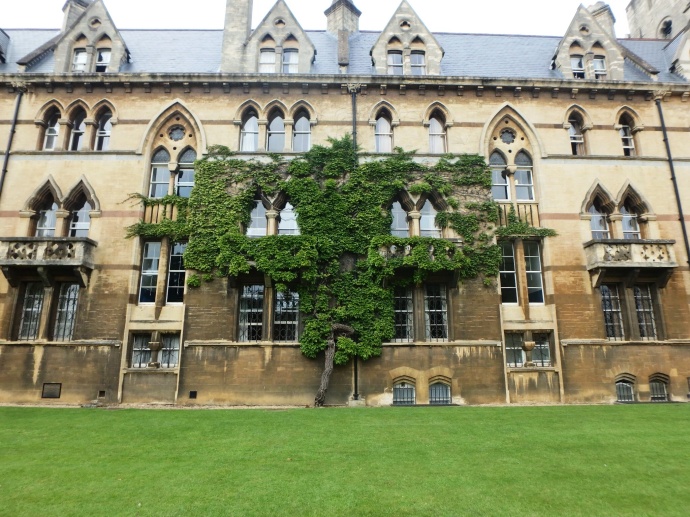 I call this, “Skeletor” 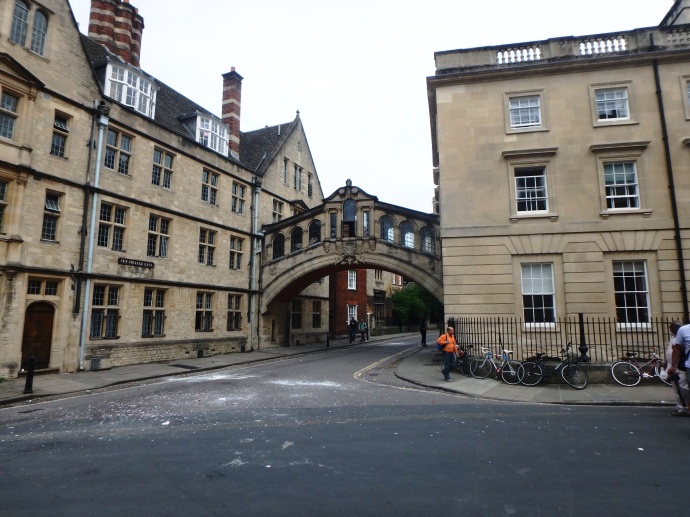 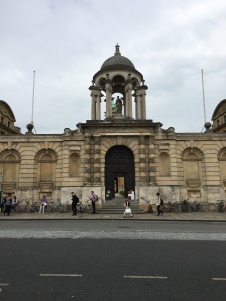 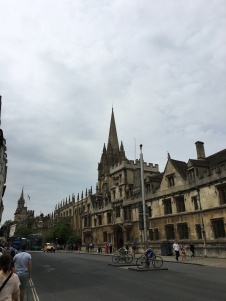 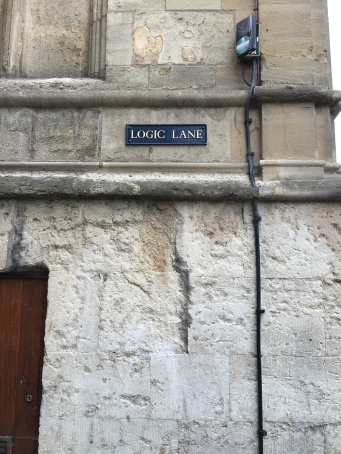 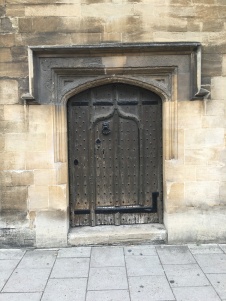 While in Oxford we stopped and wandered the market above, where I had this:

Yummy meat pie with mash; why aren’t these shops here?

I’ll wrap this up with some photos of the cemetery in the middle, sort of, of Oxford; creepy cool.

This day started with a visit to a concentration camp. The camp is called Sachsenhausen and is located in Oranienburg, Germany about 22 miles north of Berlin. We had to walk from the train station to the camp and along the way I was struck by how ordinary the town was. Some of the houses we passed very near the camp looked like summer homes and all were very neatly kept. I also found it interesting that there were markers posted every so often with stories of the camp. I had wondered how Germans dealt with the legacy of the Nazi’s, I felt it would be under the rug somewhat but I was wrong. Entering the camp was a bit surreal and seeing the “Arbeit Mach Frei” on the gate was unsettling. Again, nothing makes history more tangible than travel. I have taught about the Holocaust, but to see the actual places where the plans were carried out is powerful. This camp was smaller than I had expected then I realized it was built in a populated area. We had a limited amount of time there so I walked faster than I wanted but covered a lot of ground.

After snapping some initial photos I walked over to one of the barracks that is now a museum. Of the many photos and artifacts that were in the museum I was most affected by the actual logs of people who had been sterilized; it was a stack of journals about 4 feet high.  The fact that the Nazi’s kept such meticulous records is disturbing; no, it’s more than disturbing, it’s shocking, offensive, and unfathomable. I go to the end of the barracks and panicked momentarily because I couldn’t find the exit, I had to get out. Luckily I found the exit relatively quickly.

Following the barracks I walked over to the pathology building and mortuary where medical experiments were conducted.  They actually had to design and construct a building for that purpose.  I then wandered the grounds first coming across mass graves and a wall with commemorative plaques from other countries, and finally toward the memorial erected in the center of the camp.  Upon exiting the camp I briefly stepped into the main museum and was met by an actual Nazi uniform which shook me a bit.  Overall a sobering experience.

Marker on the way.

Original layout, I found the triangle shape interesting and ironic.

Looking from memorial toward entrance

Gift from Belarus. There were many more; I found these two the most interesting.

Just illustrating the normalcy of the town. If you can call topless gnomes normal.

It was a fittingly rainy day to visit the Wannsee House and Potsdam.  The Wannsee House is where the Nazi’s planned the final solution.  It is now a museum and educational site. What struck me the most was the beautiful setting of the house; a country retreat overlooking a beautiful lake.  The juxtaposition of the setting and what occurred inside the house is, well, bizarre. It was also very unsettling to see photos of Hitler in Germany.  I had several ‘shaken to the core’ moments, very similar to seeing the Vietnam memorial for the first time, or seeing the planes slam into the twin towers; a very visceral recognition, understanding, and acceptance that this was real, it actually happened.

Hard to fathom just how deep the propaganda went.

I was disturbed by the smiles.

Very careful use of language,; documents never use words indicating what the Final Solution actually meant.

It was apropos for us to visit the location of the Potsdam Conference after the Wannsee House.  The place in Potsdam where the conference was held was at least equal to the beauty of the Wannsee House.  I spent my limited time wandering the grounds rather than taking the tour of the building inside. It was moving to stand on the same patio where Churchill, Wilson, and Stalin sat following the war.

The patio where the Big 3 met is in the background.

Day 6: Landscape of the Dead

We had several hours to hang out in Paris following our visit to Normandy. We decided to spend that time meandering through Père Lachaise Cemetery.  Our goal was to first find the burial location of Jim Morrison but as we wandered I was both awed and amazed at the grave sites we were passing through. The cemetery felt a bit surreal which is  not unusual, but at some points it seemed we were passing through an abandoned city. I wouldn’t have been surprised if we had seen the door to one of the tombs open and it’s occupant step out as if to pick up the morning paper.  This place definitely had conveyed the atmosphere of a Tim Burton movie. Many of the tombs/crypts showed extraordinary craftsmanship and artistry; they were truly amazing. We eventually found Morrison’s grave as well as Oscar Wilde’s and they had one thing in common, other than being burial places, barriers to keep the public away. The barriers are close to the sites so they are easily viewed but apparently people were endangering the sites with their attempts at showing appreciation/reverence. I can only guess what people were doing to Morrison’s grave, maybe leaving too many objects, maybe adding graffiti, the story for Oscar Wilde’s was more clear.  At some point for visitors to Oscar Wilde’s grave it became a tradition to kiss the headstone. (“Headstone” in this case is  a bit of a misnomer, as it is really a huge sculpture.) His descendants felt that the abundance of lipstick prints was both damaging and not entirely appropriate so they had the headstone cleaned and surrounded by a glass wall.  Intrepid fans have found ways to still smooch the stone however. This was definitely an unexpectedly pleasant and enriching experience.

Day 5 started with a very early bus ride to Normandy with a smarmy bus driver, I’ll save further descriptions of him for another post.  One of the reasons I took this trip was to be able to go to Normandy.  As with most memorials I have visited, nothing really prepares you and you’re surprised by what affects you and how you’re affected. There is nothing that can convey the shear number of casualties other than visiting Normandy.  As I walked among the marble crosses and stars of David I began to think of my uncle who survived D-Day.  He was a bomber pilot who volunteered for extra sorties beyond his assignment.  While reflecting on his bravery and contribution to the war effort I was reminded of my dad who passed in March. They both led long, charmed, amazing lives.  I walked, bringing them with me, feeling the weight of the place; couldn’t help but weep.

Alas I have run out of pictures to share from the Netherlands so this will be my last post until I venture abroad again; hopefully in the near future.  I will be continuing to post on my other blog http://geowoodward.wordpress.com/ which has photos from my adventures in California.  I’ll leave you with a few of my favorites from the Netherlands.

One of my favorite ventures was to the ‘Heineken Experience’, not just because 3 beers were included with the admission price, and there was a horse that shared my name, but because it was  a great place to people watch and I got to personalize an actual bottle of Heineken. The end of the factory tour is set up like a club, disco lights, loud music and table games so people are behaving as if they’re in a club.  One guy in particular caught my attention because he was having his wife circulate around the room collecting all the unfinished beers and pouring them into his glass.  Yep, he was getting hammered.  I happened to be leaving the factory at the same time they were and they were trying to collect their free gift, which could only be collected by visiting the factory store in a different part of town.  Heineken provides a boat from the factory to the store but the last boat of the day had just left; Mr. Hammered had difficulty understanding this, I felt bad for the employee that had to try and help him understand.

I didn’t understand the cow at first but was reminded they feed the hops to the cows after making the beer.

Since I teach Geography I felt this was more than appropriate.

Just a few photos taken as I wandered the streets of Utrecht.

Old writing on an even older rock.

A wall of the Dom Church that shows evidence of …

The Dom Tower, once attached to the Dom Church…

…is separated by a pedestrian square where the nave used to be.

The Dom Tower is an excellent reference point.

The were celebrating the Treaty of Utrecht of 1713.

There was a gym inside; kinda looks like a church; found it amusing.

Why’d I take this?

Something said, “Take a picture.”

One day while visiting my brother we took his girls to a local park that had some awesome play structures, critters to pet, and some, uh, art.  I was amazed at the number of people in the park, I mean it was a weekday evening; the parks in my hood aren’t nearly as full, but to be honest they’re lame.  None of the parks near me have these cool things to pet

(note the cow behind the pig, you could “milk” it) 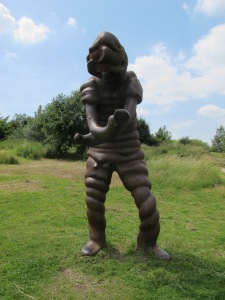 For some reason these statues made me think of this 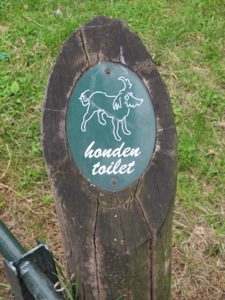 While wandering around Utrecht and Amsterdam I enjoyed occasionally coming across  the occasional urban critter.

Initially walking around Utrecht and Amsterdam I felt like I was in some sort of amusement park. The architecture just kind of had the look of being a little too storybook, if you know what I mean.  Then I was told why they appeared that way.  One reason is that the windows on many Dutch buildings are designed to get smaller as the building gets higher giving the illusion that the structures are taller than they actually are.  Another reason is that Dutch staircases tend to be rater steep and narrow making it difficult to heft furniture up to the top floors.  So the buildings lean outward slightly and many homes have a beam hanging from the top over the street with a pulley at the end to hoist heavy things into the house.  Clever, but it messes with your head a little if you’re not used to it.

Back of Rijks Museum

One for wind direction one for time.

Old meets new at the